Hong Kong Police Force riot cops engage in cat-and-mouse running clashes with protesters on December 1, 2019, Mong Kok, Hong Kong. Like most conflicts this night, the protesters have long since dispersed into the side streets by the time the police arrive.

Most international news coverage of Hong Kong protests focuses on the high intensity violent confrontations such as the siege of Chinese University of Hong Kong (CUHK), or on the enormous peaceful marches involving sometimes millions of participants. Meanwhile, smaller daily protests by diverse groups of Hong Kongers preserve the movement’s momentum and keep pressure on the government. These range from office workers gathering in malls for peaceful lunchtime singalongs, to protests by school children, to nighttime clashes between frontliners and cops in Mong Kok and elsewhere. The following are my observations on one such night.

Except for a relatively small protest yesterday evening at the Prince Edward MTR station, the previous week had seen a lull in open, street-level conflict as people watched for signals that the government might be willing to engage constructively with the protest movement after pro-democracy candidates swept 17 of Hong Kong’s 18 seats in last week’s District Council elections. Prior to last night, when police fired a couple rounds of tear gas at protesters, Hong Kong had seen over a week without tear gas, the longest period since protests started in June.

Earlier today, the government made clear its unwillingness to negotiate when the Hong Kong Police Force (HKPF) tear gassed the permitted, peaceful march from Tsim Sha Tsui to Hung Hom without provocation. Even had the police let today’s march proceed unmolested, continuing confrontational protests tonight were inevitable. The Hong Kong central government’s unwillingness to consider the protesters’ demands meant the streets would remain the place for protesters to express their anger.

As today’s large march from TST dispersed around dusk, I followed one stream of protesters into Whampoa just in time to see a group of young people in black masks converge on a traffic-light control box across the street. They opened umbrellas to hide their activity as the sound of a cordless angle grinder shrieked across the intersection. Once the lock was cut, they tore out the control panel, cutting the traffic lights to the intersection, then folded their umbrellas and casually walked away, all the while being ignored by passersby. 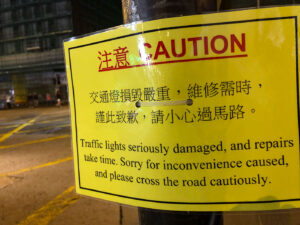 The destruction of infrastructure like traffic lights is part of a “no business as usual” strategy adopted by the more militant factions to shut down the city and force the government to the table. It has largely been limited to low-level vandalism, usually eschewing more extreme measures like explosives or violent attacks on individuals, though targeted arson of businesses with connections to the Chinese government like Bank of China has become common.

Whampoa would later become the site of fierce street battles, clouds of tear gas and many arrests. The neighborhood already felt tense, with large groups of young, black-clad people from today’s march converging there. But I was hungry and needed to switch gear, so headed back to my hotel to prepare for the protests in the more familiar Mong Kok area. As it would turn out, most protesters probably went to Whampoa, leaving smaller groups to taunt the cops in Mong Kok.

Nathan Road is a busy thoroughfare that begins in the heart of Kowloon’s upscale shopping district at the Tsim Sha Tsui (TST) waterfront and runs 2.2 miles northward through Yau Ma Tei and Mong Kok (MK). It splits the most densely populated part of Hong Kong, ending shortly past the imposing Mong Kok police station and the multiple entrances to the Prince Edward MTR subway stop, both of which have become high-intensity flash points for the protest movement, especially since August 31st when riot police stormed the station and severely beat trapped protesters. There is a widespread belief  that some of the protesters were killed. The flower-covered altar to the victims, at the MTR entrance connected to the outside of the police station, has been repeatedly torn down by cops and rebuilt by protesters.

I usually locate protests by checking Twitter and Telegram news channels, but shortly after exiting the Yau Ma Tei MTR station, I ran into a blockade of police vans across Nathan Road. Detouring west to Portland Street, riot cops were puzzlingly holding the Soy Street intersection while bystanders largely ignored their activity. There were no protesters to be seen. Best I have been able to tell, this seemingly random, temporary holding of bits of urban turf by Hong Kong cops is busy work, an attempt to look important when there is really nothing happening.

Without warning, the police abandoned the intersection and ran en masse northward on Portland Street to Shantung Street, tackling two men and surrounding and trapping a large group of young people on the stairs of a shopping center on the west side of the street. This was the first time I’d seen the kettling tactic used by HKPF on random civilians. None of these people had gas masks, helmets, umbrellas or any other protest gear. They appeared to be young people out on the town.

Hong Kong Police tackle and beat a man and detain a second man on the sidewalk. Like others detained and searched nearby, they were not engaging in any sort of protest. Shantung Street, Mong Kok, Hong Kong, December 1, 2019

About 10pm, HKPF kettled, detained and searched about 40 people on Soy Street, lining them up against a wall. As with earlier kettles and searches, most appeared to be young people out for the night. Included in the group were a number of EMTs and other medical first responders who were presumably out on the street to provide first aid for protesters. As best as I could tell, all detained people were eventually let go after ID checks and searches, something that wouldn’t have happened if they had been actively protesting.

This block of Soy Street, between Portland Street and Nathan Road, is a small, shop-lined pedestrian plaza. While the riot police were searching the detainees, a group of men sat on crates playing the board game Xiangqi or “Chinese Chess” an arm’s-reach away, completely unperturbed by the commotion around them. At the far east end of the plaza, a group of onlookers watch, a few taunting the cops from time to time. In between, a line of press in yellow vests snapped photos.

Having searched and released the detainees, the police turned their attention to the crowd that had gathered at the east end of the Soy Street plaza, while still holding an arbitrarily line and preventing anyone from crossing. One man in particular was quite agitated, screaming at the cops. His friends convinced him to calm down and leave after a cop gave a stern warning in American-accented English that he’d get arrested if he didn’t quiet down.

The police eventually left, walking backward out of the street with guns at the ready. Many of us expected a “spite volley”, a parting shot of tear gas, as they left — something that had become common practice in recent months — but they loaded into their vans on Nathan Road without incident as onlookers jeered.

Over the next couple hours small groups of protesters will engage with the Hong Kong Police Force in hit-and-run barricade building around Mong Kok, returning repeatedly to the Nathan Road/Argyle Street intersection to reassemble haphazard debris barricades and light small fires. This will continue until at least 2am after which point I decide to call it a night. Reading Twitter threads in the morning, it seems it continued for a while longer.

During the 2014 Umbrella Movement, protesters camped out and occupied a single location — the Central Government Complex in Admiralty — for two and a half months, much like many Occupy Wall Street encampments in the U.S. a few years earlier. This time, there was a conscious, collective decision to be more fluid and adaptable, for the most part avoiding unnecessary and unwinnable direct confrontation over pieces of territory. Bruce Lee’s famous advice “be water, my friend” became both their motto and a movement-wide guide for tactical and strategic adaptability.

In the video at the top of this page, you’re seeing the HKPF react to an early iteration of the burning barricade at Nathan and Argyle. By the time they got there, guns drawn, the protesters had once again vanished. Later, after the barricade had been rebuilt and lit on fire again, a protester threw a fire bomb toward a line of police vans as they rolled up Nathan Road to this same spot. The fire burned out harmlessly in the street but the cops leapt out and fired a volley of tear gas down Argyle anyway, the protesters having long since “be-watered” into the night leaving the tear gas to dissipate over an empty block.

Each time the police return to move the trash from the road, they become visibly more agitated and their behavior becomes increasingly unprofessional. At one point, they engage in a yelling match with a group of onlookers taunting them from a block away. I don’t speak Cantonese, but from what others were telling me, I was missing some nasty and amusing taunts. At times, officers had to physically restrain their colleagues from engaging with the hecklers. The protesters and heckling were clearly getting the better of them.

Throughout it all, the press contingent outnumbered cops and protesters combined. Lacking any visible protesters, the cops would often be left ordering the press around, seemingly just for something to do. In the photo below, I count at least 40 people in yellow vests or in helmets or with professional cameras. There were more behind me, out of the frame. This tail-wagging-the-dog disproportion became comical at times as the yellow-vest contingent scrambled to get a photo of the one little fire or the same cop holding a gun. In the photo below, three protesters tend the small fire, while a few more look on. The cops were several blocks away, chasing another group who reportedly built another barricade there.

Each time the police returned, the protesters scattered, leaving the cops with trash pickup duty. Having cleared the debris, the police continued cordoning off the intersection, provoking more heckling from those stuck on the sidewalks unable to cross. More often than not, the fleet of police vans and the officers themselves were the main obstacles to traffic on the streets throughout the night, not the protesters or hasty barricades.

Throughout my six weeks in Hong Kong, I routinely observed the HKPF block off a crosswalk, a street, a sidewalk or an entire intersection in a completely arbitrary fashion, with no visible logic to it. Then, equally devoid of objective reason, they’d block off a different sidewalk or street, often aggressively pushing people out of the way to do so. Yet, in many cases, pedestrians could simply walk around them. My best guess is that they needed to look important, to project an air of authority and control, despite the self-evident lack of it. It could also be that their commanding officers used busy work to keep individual cops from going rogue.

Possibly the only effective thing I saw any authorities do all night was to bring in a dump truck with a loader and remove the barricade material from the road so protesters could no longer use it. At this point, I was already headed in for the night. The press track and field team had just sprinted en masse down Nathan Road at the word of another protest two blocks away. I went and found a noodle shop still open at 2am, ate and started the walk back to TST. Tomorrow would be another day.