Today’s march is billed as a “Don’t Forget Our Origins: 5 Demands” march and was organized online a mere five days ago when one person proposed it and applied to the Hong Kong Police Force (HKPF) for what is known as a LONO—Letter of No Objection; a de facto permit—which was granted.

The march started at the clocktower at the Tsim Sha Tsui (TST) ferry terminal and was to follow Salisbury Road along Victoria Harbor to the Hong Kong Coliseum in Hung Hom, after which point marchers were to head home. It didn’t exactly work out that way.

While people could easily join the march from anywhere along the route where it was most convenient, protesters in Hong Kong tend to go to the announced gathering spot and start from there, each person completing the entire march.

The march was set to start at 3pm, but began once too many people arrived for the open plaza around the clock tower to contain them. Once in motion, the marchers pushed steadily forward, around the seaward side of the museum and back out to Salisbury Road headed northeast along the waterfront toward the Coliseum.

On Salisbury, the massive crowd spread out and quickly occupied all lanes of the entire wide thoroughfare, moving, chanting, singing and holding up printed posters, handmade signs and banners.

The organizers will later estimate the crowd size at 380,000; the police will say a mere 16,000. Likely both are incorrect, but it doesn’t matter: the march was huge and stretched continuously from TST to Hung Hom, filling Salisbury Road to the brim. The exact number is less important than what the mass turnout indicates: after five and a half months of protest, despite escalating police repression and a government increasingly deaf to its citizens, Hong Kongers’ resolve and unity has not weakened.

At around 4pm, an hour after the march began, the police withdrew the LONO, essentially making the march an unlawful assembly. About 45 minutes later, police fired multiple volleys of tear gas into the dense crowd at the base of the Hung Hom overpass. [And apparently elsewhere back toward the beginning of the route, but I was too far away to see that, so I’m reporting what I did see.] Southwest of the gas cloud, the crowd began an orderly about-face and slow-walk back toward TST, while some diverted off to East TST when they could. There was nowhere to go, quickly or otherwise, with tens of thousands of people trapped on an enclosed highway bounded on one side by the sea and lines of riot cops or buildings on the other. On the Hung Hom side of the gas cloud, people continued up the overpass, leaving a gas-filled void of open road.

While most marchers wore the standard protest garb—black clothes and masks—few had helmets or gas masks. This was to be a lawful, orderly march, a place for wo lei fei—the “peaceful, rational, nonviolent” protesters—to march without fear of violent confrontations. There were people in wheelchairs, elderly marchers and many parents with children in the crowd.

The attack by police was unprovoked. The HKPF would first claim smoke bombs and bricks had been thrown, requiring them to respond with force, but would quickly and repeatedly change their story when asked by reporters for evidence. It’s hard to lie when 100,000 people with cameras are watching you.

Last Sunday, Hong Kong citizens voted overwhelmingly for pro-democratic District Councilors across the city’s 18 districts. The intervening week has been relatively calm, with no violent clashes or tear gas until last night in Mong Kok. This was a brief period where the government could have easily deescalated the crisis and begun talks without losing face. The people had spoken at the ballot box and the protesters had mostly stood down for a week. It was a wide open door. Instead, Chief Executive Carrie Lam and the HKPF continued their tone deaf, meat fisted policies. (For U.S. audiences, the Chief Executive is akin to a U.S. state governor, but appointed by Beijing.)

One remarkable characteristic of the Hong Kong pro-democracy movement has been the protesters’ unwavering unity and refusal to be divided over tactics. The wo lei fei and the jung mou or “brave fighters”/”frontliners”, don’t seem to be divided or debilitated by the endless arguments over methods that plague most U.S. protest movements. After internal divisions contributed to the downfall of the 2014 Umbrella Movement protests, 2019’s protesters adopted an explicit “no splitting” practice: differing tactics should not divide the movement.

While there are in fact significant tactical disagreements, the diversity of protest tactics in Hong Kong still works. From my observation, the reason is two-fold: first, unity around the five core demands. As one person told me, “We disagree on tactics, but we are all fighting for the same goal in our own way.” Secondly, there seems to be room for dialog and respect across the range of methods and tactics. For example, during peaceful marches, the brave fighters or “frontliners” largely hold back on major vandalism or aggressive confrontation with police, limiting their role to a protective one: ready to form a human shield against the cops until others can disperse safely.

However, if the cops escalate, frontliners can be counted on to fight back and seek revenge. (With the unprovoked attack on the peaceful march today, the aggressive counter attacks by frontliners that will come later in the evening are almost preordained.)

At times where protests have become too aggressive, such as happened during the airport occupation earlier in the year where two Chinese nationals were beaten, the widespread criticism, both from within the movement and without, led to a swift, well publicized apology by protesters.

Once the tear gas cleared from the overpass area, the march turned and continued pressing forward. On the far side of the bypass, after passing Hong Kong Coliseum, the road splits into a hamster maze of roads, ramps, surface streets and pedestrian walkways. Marchers split into multiple streams and eventually dispersed. I ended up in Whampoa, an unfamiliar but interesting neighborhood now filled with clusters of black-masked young people. It was clear that many had no intention of calling it a night.

A couple hours later, Whampoa will be the site of heavy tear gas and running clashes with cops, but for now I head back to the hotel to switch gear, charge batteries, get some food and prepare for the inevitable street battles tonight. 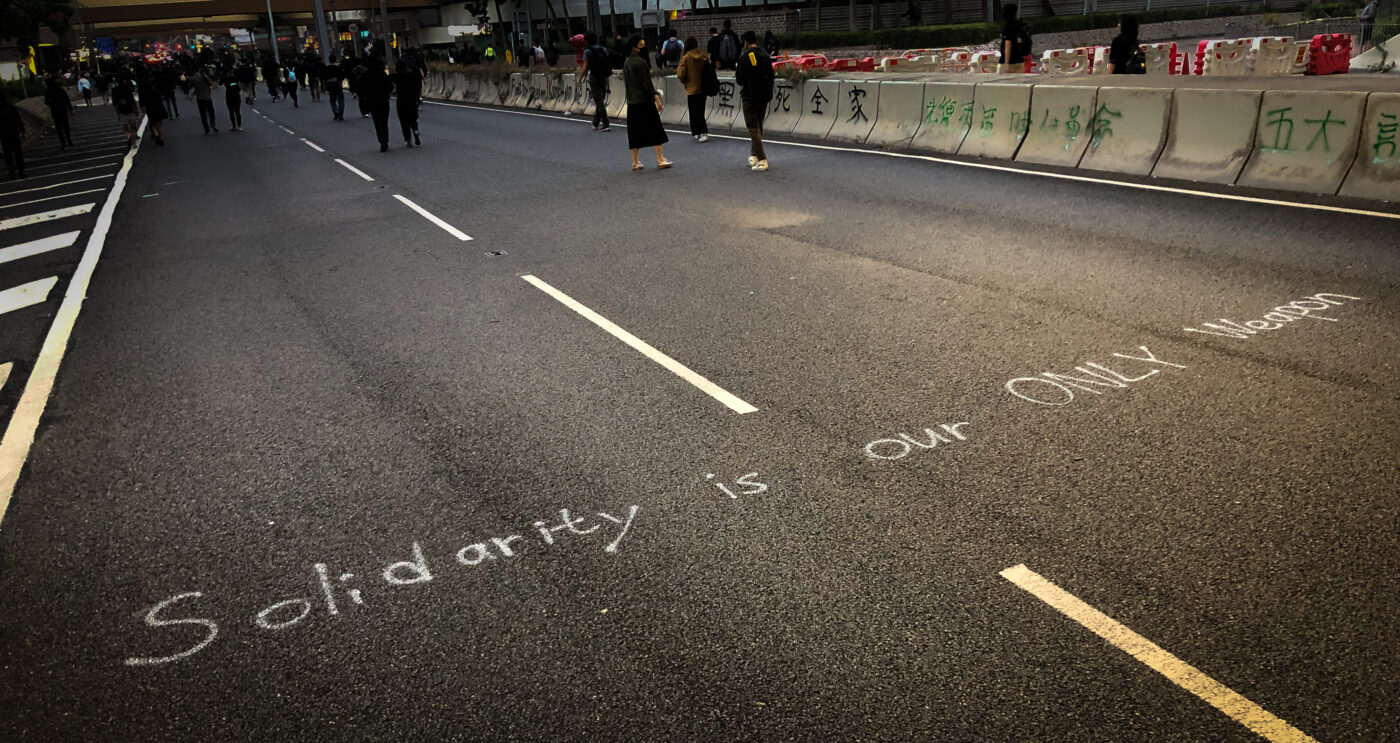